After running across his beautiful model kit of the Tuckerton station, I contacted Richard at Right on Tracks Models about the feasibility of adding a Woodbury, NJ station kit to his lineup. For the last 8 months I have been running down contacts from the Woodbury Historical Society and the group that led the historical restoration of the station. I have also been taking/collecting pictures and measuring the building.

I am absolutely thrilled that Richard has agreed to get this project on his drawing board for this winter. His previous kits can be found at: https://www.rightontrackmodels.com/


Woodbury is the county seat of Gloucester County and was founded in 1683 by Henry Wood, a Quaker, from England. Its short-lived (8 years) first railroad, the Woodbury and Camden Railroad, came to town in 1838.

George Green brought his patent medicine and glass manufacturing to Woodbury in the 1870s and the town flourished. (I’m sure the opium content of his medicines spurred its reputation as a world class medical cure-all.)

In 1917, 139 daily trains passed the triple-tracked Woodbury train station. At one time 40+ passenger trains a day stopped at Woodbury but alas, the automobile triumphed and the last passenger train through town ran in 1971. In 1996 the station was restored and since then has been a popular historic restaurant. 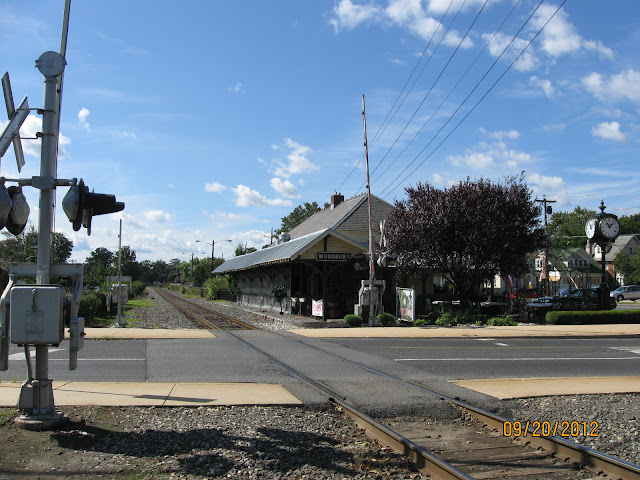 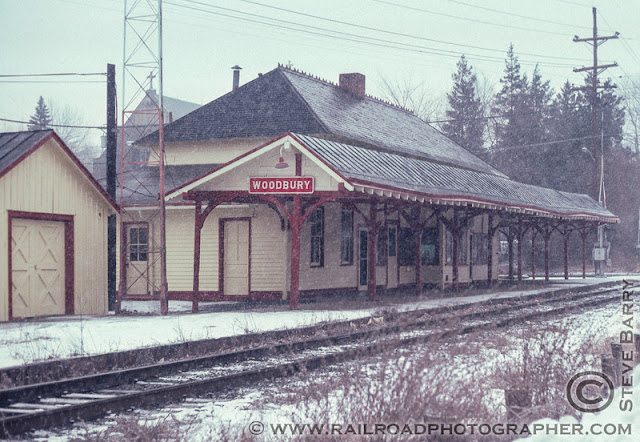 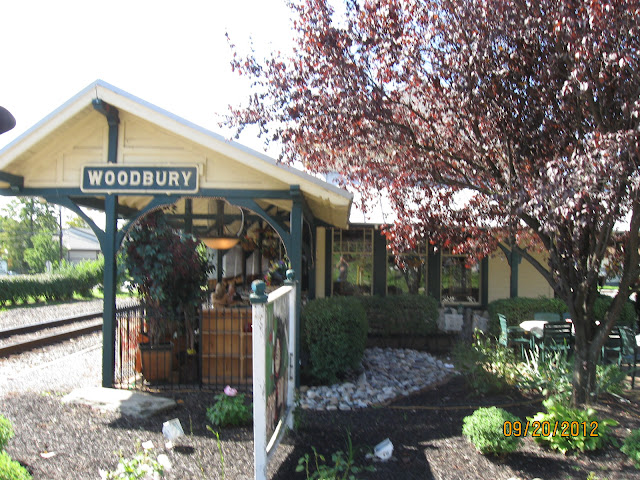 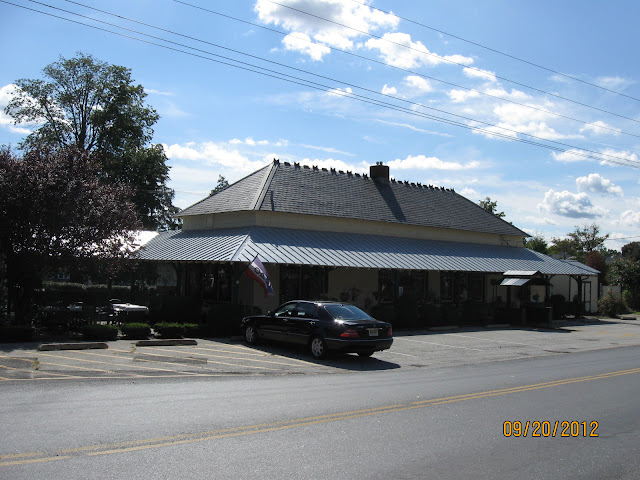 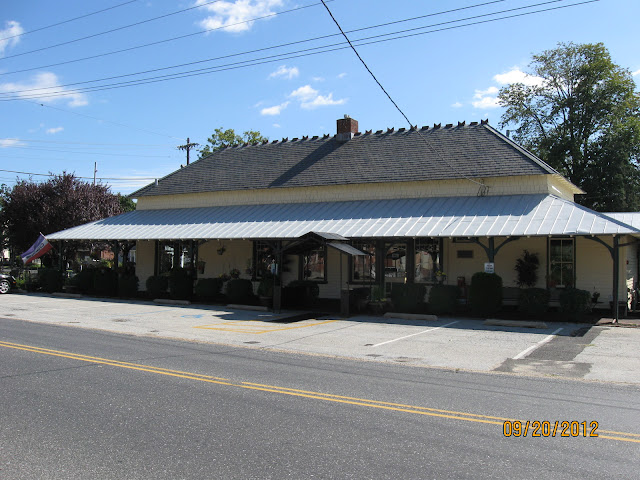 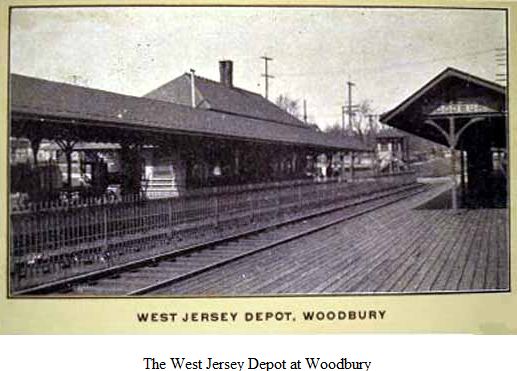 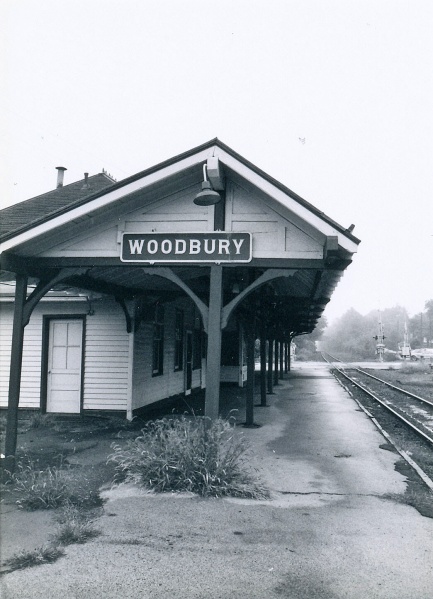 Someone on one of the forums was asking folks to submit pictures of their entire layout, not just a scene. That is a tough assignment if your layout is in a loft with tight ceiling clearances. Although my layout is only 12'x17' I can't get back far enough or high enough to encompass the whole railroad in one shot.

I will be winding down this blog (except for occasional special events) since the major portions of the rebuild are essentially completed and there were no responses to my "anybody reading" request on the August 8th post. It is therefore appropriate to finish with recreations of highlights of our last operating session where we basically ran a complete PRSL 1954 freight schedule. (Engine assignments were fudged!)

This will be in 2 parts.

We began the day with the Philadelphia transfer arriving in the Pavonia yard with loads from the frontier (anything beyond southern New Jersey). It is headed prototypically by a Pennsy RT624 (sometimes PRR FAs). A pair of BS12s head out to meet it and begin breakdown and reclassification of the freight cars. 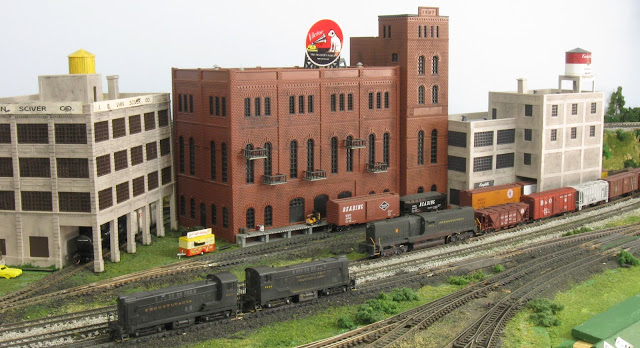 A quick aside here. The only N scale manufacturer equipment available painted for the PRSL are (3) Atlas GP38s (w/o the extended cab) and (6) Bowser N5 cabins (both logos). A friend has also re-lettered an Atlas VO-1000 (~BS12) and 2 RDCs for me. I have (4) AS-16 (WM version) shells but will need to find help getting them completed and on the road. The AS-16s were the entire PRSL road diesel power from 1950 until the arrival of the GP38s in 1967. When the PRSL needed additional power, it was provided from it's parents, the Pennsylvania RR and the Reading Company. Almost anything the parents had could find its way onto the rails in South Jersey.

Kicking off the road parade WY841 was the coal drag to supply the power plant in Deepwater. Here we find it leaving Camden. 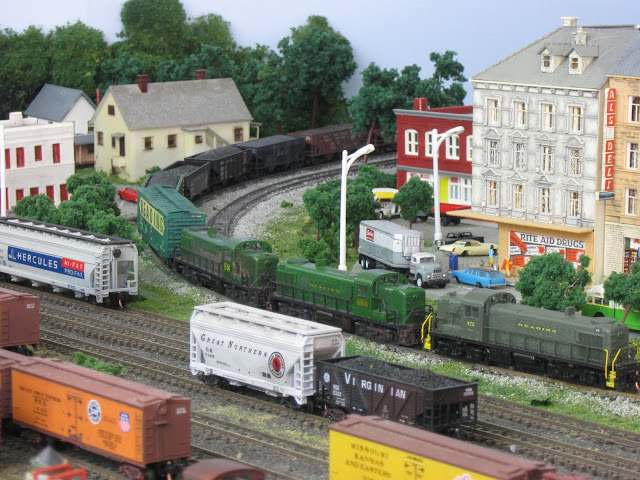 I am sure the Woodbury commuter did not find the swirling coal dust enjoyable during WY841's run-by! 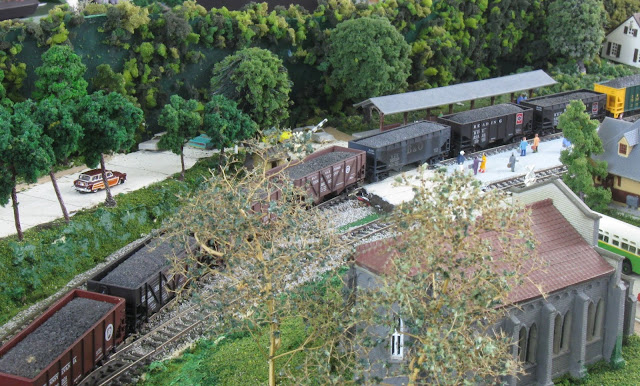 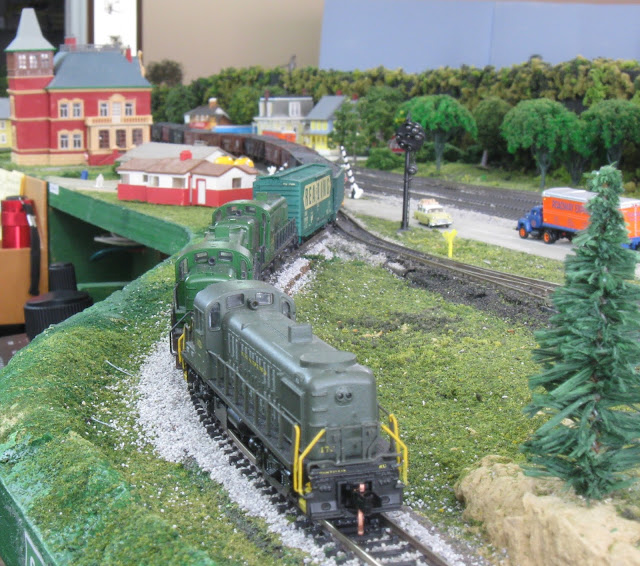 WY843 the Deepwater local leaves next and here we finding it stopping along the way to deliver sand and cement to the Buzby Bros. facility in Westville. (All trains on these branches are “turns”. They leave the Camden freight yards go to one of the 3 branch terminuses (Millville/Salem/Deepwater) and return to Camden the same day.)


WY33 the sand hog with a string empty gondolas and covered hoppers heading south for loads. Here we see it passing the Haines -Falcone dairy farms 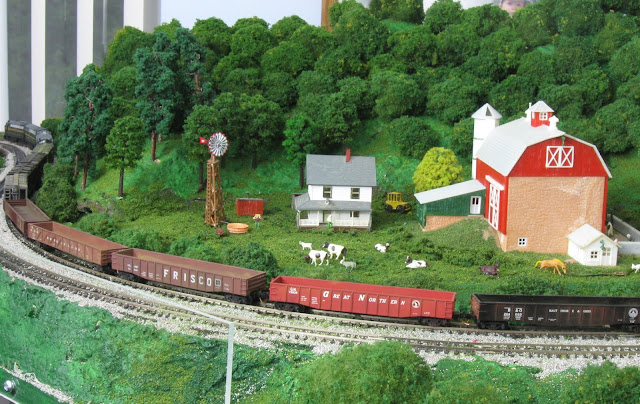 WY27, the Millville local, has already departed and now the Salem local (WY51) follows soon after. Here it is passing the Broad Street Lake in Woodbury and shifting reefers at the icing facility in South Woodbury.

Final departure of the day: WY79-WY80 the tank sweeper is off to service the refineries in Westville and Paulsboro. 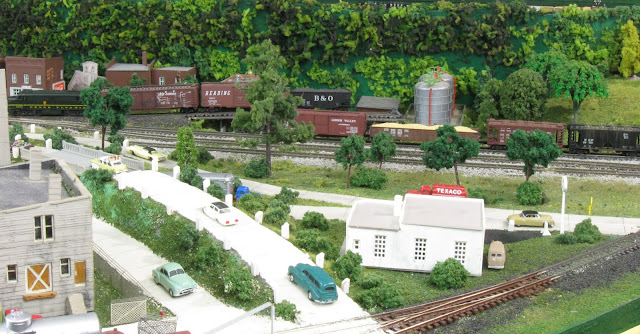 WY33 is now WY34, the loaded sand hog . It is passing through Westville with New Jersey’s chief export: sand. (Remember this is the early 1950s and the massive interstate road constructions have an insatiable appetite for concrete (hence sand). 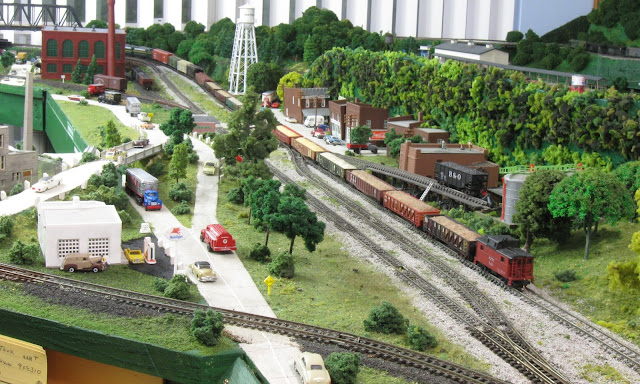 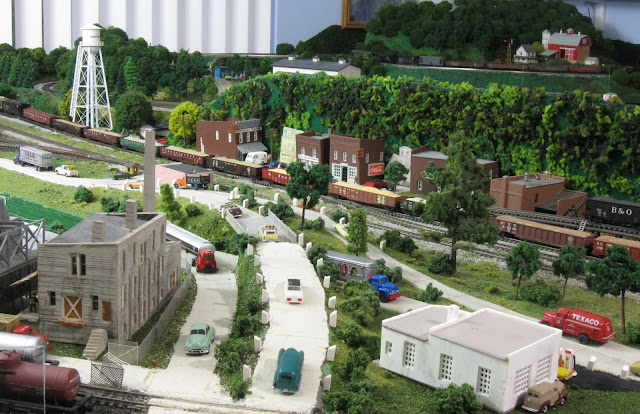 WY840 (841) is now straggling home with empties. It has to cross over 3 tracks in Woodbury to continue right hand running back to the yards.

Here is the track arrangement after the recent rebuild: 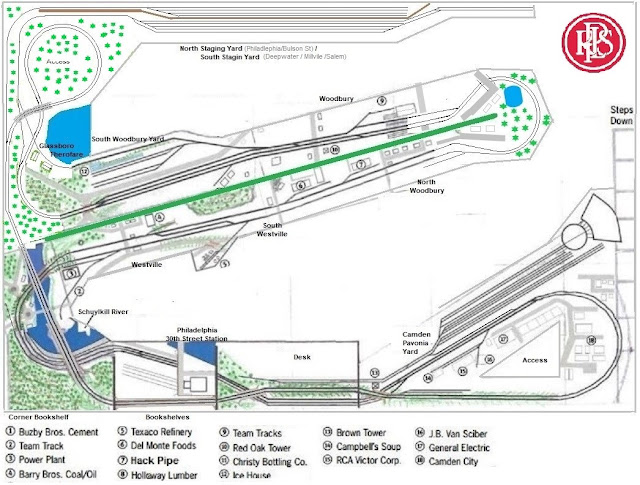 And here is the old "before" version: 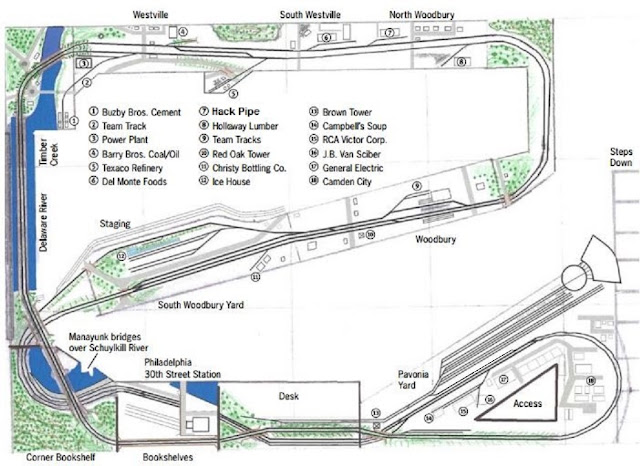 It is hard to believe that American N Scale equipment has been around for more than half a century. I know that its European roots go back much further but I consider American N Scale to have begun flourishing when Atlas (with Rivarossi) and Aurora (Trix) began marketing American equipment in 1967. My earliest equipment was purchased in 1968. That year I bought 22 Atlas freight cars, 3 from Aurora and a single Arnold Rapido. 6 passenger cars from ConCor (4 GN) and AHM (2 PRR) came along for the ride. My introduction to quality KD freight cars did not begin until the late 70s.
In 1969 my first engines were 2 Atlas (PC) GP40s and an AHM (CB&Q) GP30. A pair of Atlas (GN) F7s followed. Their motors burned brightly (and ran fast) but flickered into their death throes rather quickly. They are all gone now, $5 projects in other modelers’ part boxes. My oldest still running (?) engines are my Trix 0-6-0s (79), ConCor RDCs (81) and a bevy of Atlas RS3s (83).
The KDs are from the late 70s. Some of my first KDs were special runs (Cross Roads Ranch, Youth Awakening, and the Gospel Train) put out by a Pastor to raise money for some facilities that ministered to at-risk kids. (You cannot beat free trains for a tax deductible gift!). I don’t think they sold well because I understand a model railroad club ending up buying the unaccounted for stock for repainting purposes.

Since the initial stage of my layout rebuild is now just about done, I thought it would be a good time to honor the equipment that got me all started in N gauge 50+ years ago. It will end with some of my current equipment. I have never used a video editor before so I cobbled this together with "shotcut" shareware and a poor resolution point and shoot camera.

I have rarely enjoyed such a string of modeling ambition and I rode the wave as long as possible. This will conclude the scenery wave as it is now time to prepare for an upcoming operating session. (I have 63 turnouts to tune, a short in one of the 2 yard leads to diagnose, and waybills to realign.) 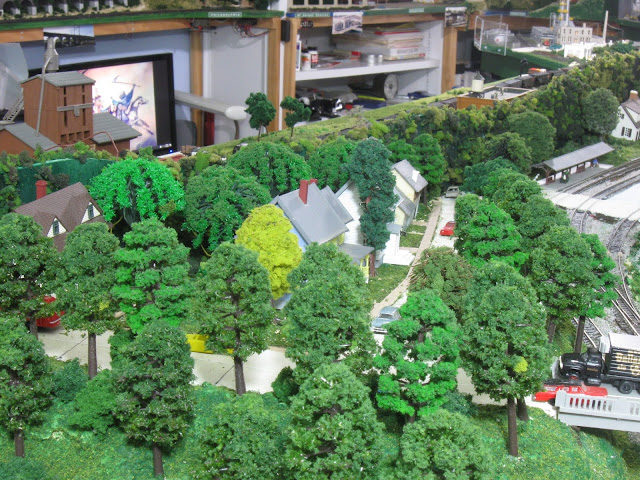 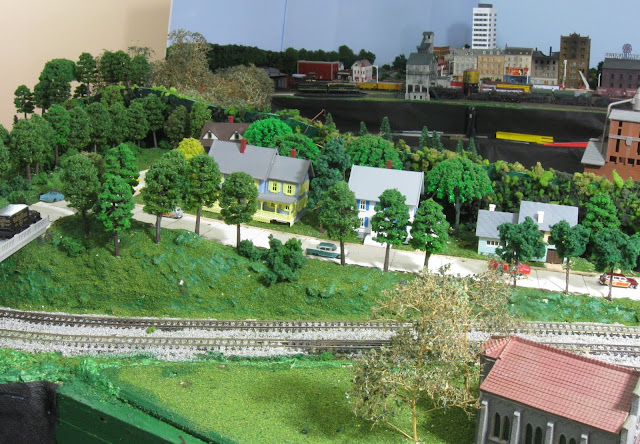 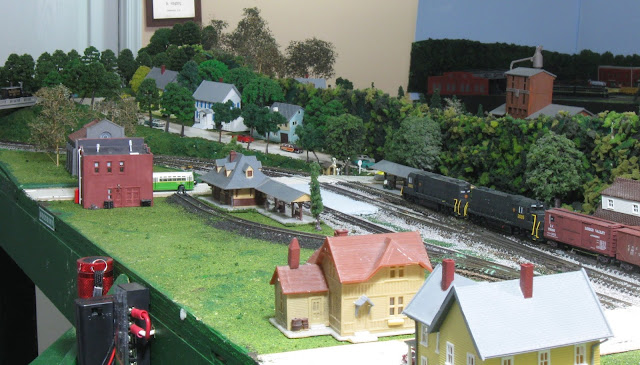 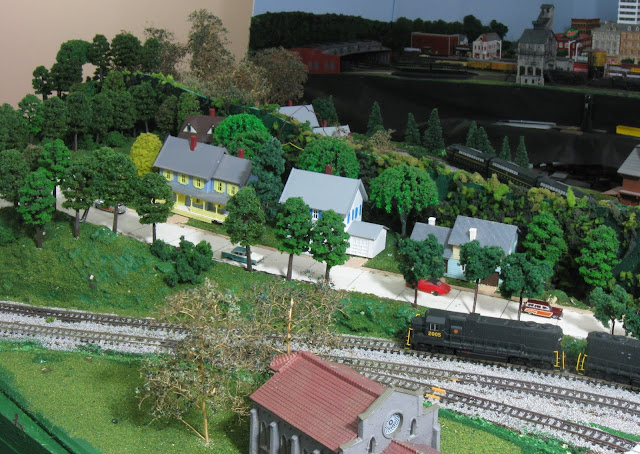 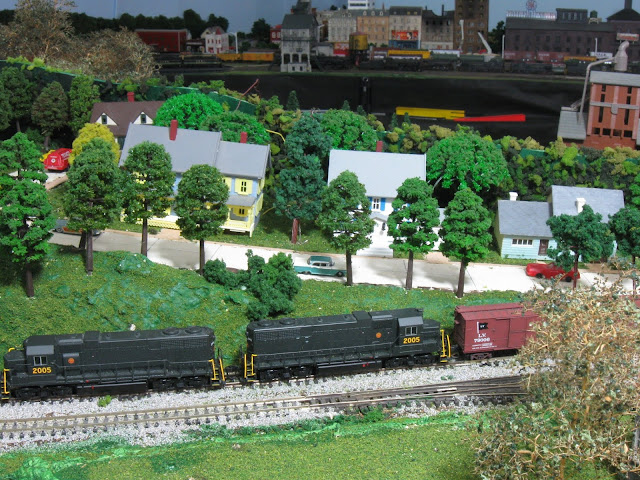 Washington Ave in North Woodbury got extended (although it now curving in the opposite direction of the prototype). 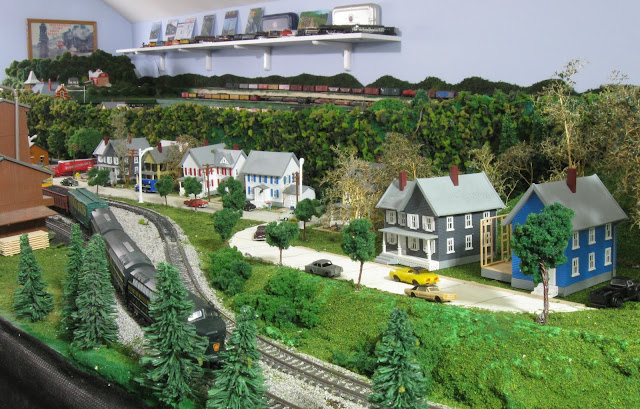 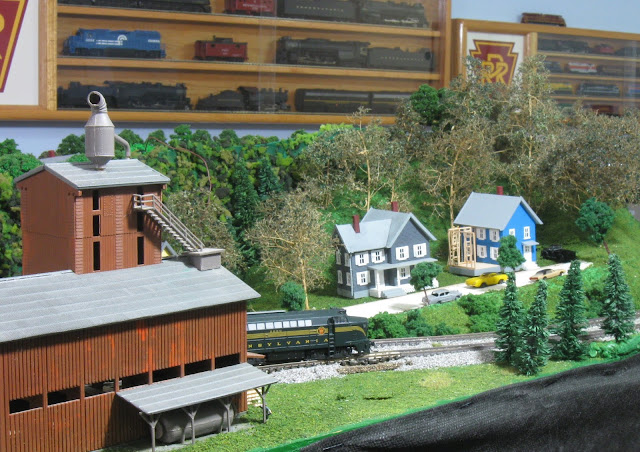 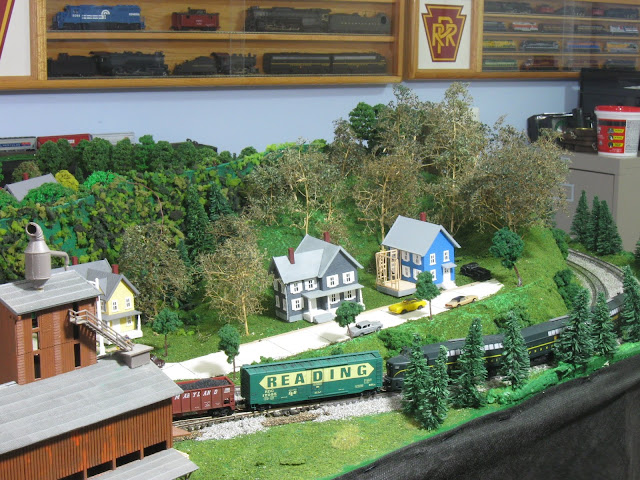 Now the bulbous peninsula end has been broken up and somewhat disguised.